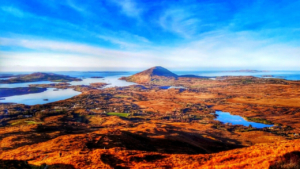 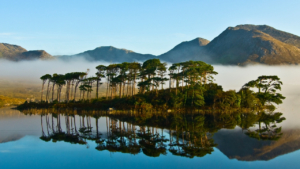 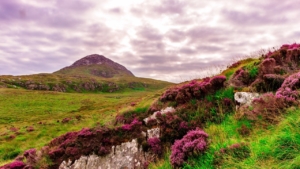 Explore the hidden gems of highly scenic Connemara on our fully guided day tour from Galway City including Connemara National Park or Kylemore Abbey along the magnificent Wild Atlantic Way. Min 1 , Max 50. Available all year round.

Our Connemara tour takes in all the highlights of Galway Bay and Connemara along the Wild Atlantic Way. This tours’ focus is on taking you from the centre of Galway, into the true heart of Galway, Connemara!

Departing from the Kinlay Hostel on Merchants Road, Galway at 09:30, your fully trained, local driver / guide will take you out from Galway City through the Claddagh and Salthill, then west along the southern shores of Connemara, looking out across Galway Bay, travelling along the Wild Atlantic Way.
As our tour passes through the picturesque villages of Barna, Furbo, Spiddal and Inverin, you will see thatched cottages, dry stone walls, mountains, woodlands, rivers and streams, lakes, Connemara ponies, amazing beaches and unspoilt bogs and deserted islands.

Our first scheduled stop of the day is at Pearse’s Cottage, Rosmuc (admission not included). Patrick Pearse was one of the leaders of Irish Nationalism and a signatory to the Proclamation of Irish Independence, read out by him outside the GPO in Dublin during the Easter Rising 1916.
Then it’s on through Connemara’s hidden jewel, Bothar na Scragoige. View the wilderness bog landscape and experience the tranquillity and isolation of Connemara.

We have a photostop at the picturesque little fishing village of Roundstone and then it’s out along the Wild Atlantic Way. To our left is the iconic Dog’s Bay Beach stretching a mile out into the Atlantic Ocean.

Our next scheduled stop is Derrygimlagh Bog (Wild Atlantic Way – Signature Point). This remote site was the centre of the communications and aviation world in the beginning of the 20th century.
After travelling through Clifden, the capital of Connemara, we head skyward. Renowned worldwide for its heart stopping twists and turns, the Sky Road (Wild Atlantic Way – Discovery Point) swoops and soars above the Atlantic Ocean. The views and photo opportunities from this ‘Discovery Point’ have to be seen to be believed.

Next on our tour you have a choice of stop:
A 2 hour stop to explore and ramble / hike in the Connemara National Park
or
A 2 hour stop at the magical 19th century limestone and marble Kylemore Abbey (admission not included).

To finish off our tour we weave our way between the majestic Twelve Bens and Maumturk mountains through the Inagh Valley and onto the main Galway to Clifden road where we greet the impressive Connemara Giant as well as a visit to the famous ‘Quite Man Bridge’ before returning to Galway City.